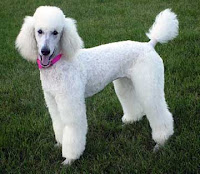 A woman in Michigan was startled when she was accosted by a naked teenager while walking her poodle.

Lt. Craig Mast of the Oceana County Sheriff’s Office said a 14-year-old youth walked away from a youth behavioral treatment facility Monday morning, stripped down, and was with a “giant” white poodle when he approached a woman working in her yard just after 11:30 a.m. Monday in the area of Oceana Drive and Lake Road.

“The young naked man approached her with this poodle, and she immediately realized something peculiar,” Mast said.

When the woman asked the boy if he was all right, he told her some statements that didn’t make much sense, Mast said. The boy said his mother had kicked him out of her home in the Saginaw area.

When the woman, 53, of Hart Township, got out her cell phone to call for help for the boy, he assaulted her, pushing her in the upper chest, and took her phone. He fled the scene and broke the phone in half, the sheriff’s office stated.

The woman went to a neighbor’s house and called 911.

Deputies responded to the victim and shortly afterwards they located the boy near Oceana Drive and Lake Road in Hart Township near the American Legion Hall.

My favorite part of this story is when she realized something was odd after being approached by a naked teenager. Really?

I hope the poodle is ok.